Soreen in the Sahara

It's almost a year ago since Soreen completed a Guinness World Record and how could we forget the guys that cycled for the whole 24 hours? Carl Cleghorn being one of them!

Not one to take endurance racing lightly, Carl Cleghorn's next challenge was to complete the 6 day / 151 mile (243km) endurance race, The Marathon Des Sables across the Sahara Desert in Morocco. Not only did SoreenHQ sponsor Carl for this epic race, Carl also packed his trusty malt loaf in his rucksack to the envy of many other racers!
After completing the race Carl got in touch to tell us that he'd recovered and that the race went very well finishing 331/850 in very hard conditions, here's just some of his story...
"A Sale Harrier member, I'm 34 years old, and I'm taking on the world's toughest footrace - 151 miles through the Sahara - the equivalent of five and a half regular marathons in blistering North African heat!I'm doing it to support Sale Rotary Club which does outstanding work for the local community, its small charities and its people. This is an insane running challenge and I'll be putting myself through hell on earth - but I may as well do some good at the same time and help my local community. And I can't think of a better partner than Rotary. I signed up for this year's Marathon des Sables race three years ago, and I'll give all the sponsorship proceeds to Sale Rotary Club's benevolent fund. I'll help decide how it's divided between local causes.
As a formally recognised 'ultra distance runner', I've only been running since 2007 when I did the Great Manchester Run and found I was gasping for air after 200 metres. But I now have four marathons, two half marathons, and a collection of fell runs to my credit, as well as a 40 mile race around the Peak District.
The Saharan 'Marathon des Sables' - which begins on 31st March this year - will be my biggest challenge yet. I'm currently training by running up to 100 miles a week, cycling, swimming and spending hours in the gym to prepare myself for the six day route. I'll cover up to 50 miles a day carrying my own rucksack of food, clothing, sleeping bag and medical supplies for the week.
There'll be no local Tesco to call at if I get hungry or miscalculate my energy needs! I'll be running across huge Sahara sand dunes and over rocky uneven ground in temperatures of up to 120 degrees Fahrenheit - that's nearly 50 degrees Celsius!
Physical fitness will be important but mental stamina will also decide whether I complete the distance.This race has been my dream for three years now…but I need sponsorship and donations to make it work, which is where SoreenHQ came in. 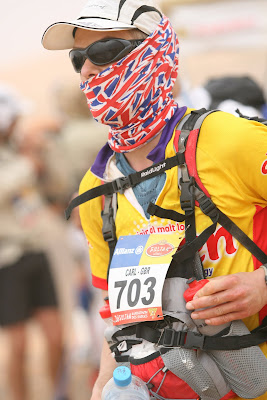 As well as some Soreen malt loaves and Soreen Go bars, I took the Soreen cycling top with me, which proved to be useful on the windy Sandstorm stage. As we were left to 'fend' for ourselves and my Camera broke the first day in the desert I didn't get many pictures, but I did get a lot of people asking me if I was sponsored by Soreen and I was genuinely surprised how many people said they brought some on the race with them! I took some Soreen products and a guy in my Tent had 2 whole Loaves in his rucksack, needless to say he wouldn't share it out! :-) and where he found the room for them is beyond me, I could barely fit the roadbook into mine, although I did have a light pack.
Since coming home, you must have seen profits increase as I've been adding your new Soreen Large Loaf to my basket every time I go weekly shopping now, and many friends now say they eat it after discovering it's energy benefits."

To follow Carl's progress, you can read his daily race diary http://mds-carl.blogspot.com/, not for the faint hearted...here's a snipped from day 3 of race:

"Wow, I feel like I've been hit by a truck! I'm slowing down a little, but the weather is just brutal! It hadn't been too hot until today but very windy and sandblasted. The heat has come back with a vengeance now though. Big day tomorrow, the 82km stage. I feel sick all the time and can't stomach the food. I plan to do whole stage in one helping. It'll be something like 20hrs! I'm getting all of your e-mails, so thanks, they really help when I hit a low point. This is the toughest ever MDS, 17 people are out already. There will be more tomorrow..."

This website uses cookies so that we can provide you with the best user experience possible. Cookie information is stored in your browser and performs functions such as recognising you when you return to our website and helping our team to understand which sections of the website you find most interesting and useful.

Necessary cookies are absolutely essential for the website to function properly. This category only includes cookies that ensures basic functionalities and security features of the website. These cookies do not store any personal information. You may disable these by changing your browser settings, but this may affect how the website functions.

If you disable this cookie, we will not be able to save your preferences. This means that every time you visit this website you will need to enable or disable cookies again.

These cookies enable sharing on Social Media platforms like Facebook and Twitter. Some of these cookies will allow the third parties to understand where users are sharing information from, track user behaviour anonymously to improve relevance to service to services and advertising.

Please enable Strictly Necessary Cookies first so that we can save your preferences!

Analytical cookies are used to understand how visitors interact with the website. These cookies help provide information on metrics the number of visitors, bounce rate, traffic source, etc. The cookies collect information in a way that does not directly identify anyone.

Please enable Strictly Necessary Cookies first so that we can save your preferences!

A cookie is a small text file that a website saves on your computer or mobile device when you visit the site. It enables the website to remember your actions and preferences (such as login, language, font size, and other display preferences) over a period of time, so you don’t have to keep re-entering them whenever you come back to the site or browse from one page to another. Cookies do not give access to your personally-identifiable information. The vast majority of websites now use cookies and some are essential for a website to function.

You can change your cookie preferences at any time by clicking here. You can then adjust the available sliders to ‘Enabled’ or ‘Disabled’, then clicking ‘Save Settings’. You may need to refresh your page for your settings to take effect.

The table below explains the cookies we use and why.

Alternatively, most web browsers allow some control of most cookies through the browser settings. To find out more about cookies, including how to see what cookies have been set, visit www.aboutcookies.org or www.allaboutcookies.org.

Find out how to manage cookies on popular browsers:

To find information relating to other browsers, visit the browser developer's website.

To opt out of being tracked by Google Analytics across all websites, visit http://tools.google.com/dlpage/gaoptout.